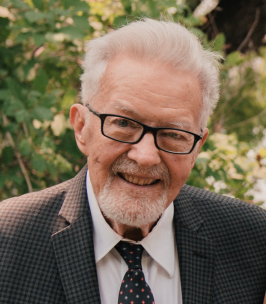 Our family is deeply saddened to announce the passing of Allan Labun. Allan was born on September 18, 1935 on his parents' farm in Plum Coulee, Manitoba. He was always pleased to specify the exact location of his birth as NE28-3-3W. When he went off to the country school he had to quickly learn some English, as they didn’t teach in Low German. Allan drove a horse and buggy to school with his younger brothers, and loved to tell the story of a particularly harrowing ride when his stubborn mare took off back to the farm at a full gallop, narrowly escaping tragedy by suddenly putting on the brakes and stopping with her nose touching the barn door. Allan especially loved grade nine, when the world of literature was opened to him by the teacher in his one-room school, who left him to learn on his own while teaching the younger students. He devoured one book after another, becoming acquainted with Jean Val Jean, The Count of Monte Cristo, the Hunchback of Notre Dame, Greek and Norse mythology and many biographies of famous people.

Allan grew up working on the farm and drove a tractor by the age of nine. He was a great help to his dad, milking cows, baling hay, harvesting, and even building a machine shed and granary. High school required moving to Winkler, where he flourished and enjoyed his studies. He had always had a love for music and learned to play clarinet from Ben Horch, the Winkler high school orchestra conductor. After high school, he attended Winkler Bible School, followed by the University of Manitoba where he received his Bachelor of Arts and Bachelor of Education degrees. He taught at Sisler and Elmwood High Schools for 11 years.

Allan loved to travel. After university, he and some friends moved to Hamburg, Germany on a teacher-exchange program. While he was there, he wrote a regular column for the Winkler newspaper called Footloose in Europe. Years later, he took up a teaching position in Binatang, Sarawak in Malaysia. These important years allowed him to live out his spirit of adventure.

When he moved to Winnipeg and began attending the North Kildonan M.B. Church, he met Irene Koop. Three months later they were engaged and soon moved to Malaysia, where they started their life -- and their family -- together; Theresa was born in Binatang in 1966. Allan taught English, and became very involved in the local church, Allan as choir director and Irene as Sunday School teacher. They made many lifelong connections there, and in the last years of his life, Allan found much joy and meaning reconnecting with his former students.

Allan had a strong faith and deep reliance on God. His calling to become a pastor was affirmed by the church community; in his early years at Bible College a professor told him that one day the Lord might call him into pastoral ministry. When they moved back to Winnipeg, the congregation at North Kildonan M.B. Church invited Allan to become assistant pastor, and encouraged him to attend the Mennonite Brethren Biblical Seminary in Fresno, California where he received his Master of Divinity. Later he continued his studies at the Denver Seminary and completed his Doctorate of Divinity. Allan believed that pastoral ministry comes at the call of God, but not without the call of the church as well. North Kildonan M.B. founded the Mclvor Avenue M.B. Church, with Allan as its first pastor.

Throughout his time at McIvor, he was always excited and humbled to see God at work, creating a spirit of love and cooperation. His love for McIvor Church and the people there has been one of the most important things in his life. After McIvor, he spent seven years ministering at the Kitchener M.B. Church, and served as interim pastor in many churches after his formal retirement. He and Irene put into practice the advice given to him by J. B. Toews, that the most important part of being a pastor was to “Love the people”.

Along with the pastoral ministry, Allan was actively involved with the Mennonite Brethren conference at the provincial and national levels. He loved their motto “Working together to do what we cannot do alone.” He served tirelessly over the years as Conference Moderator, on the Committee of Reference and Counsel, and the Board of Faith and Life. He considered it a privilege to work with the gifted servants of the Lord, doing God’s work in their little corner of God’s Kingdom. Allan gained much joy from his weekly breakfast meetings with a gang of four other pastors. For 43 years they shared joys and sorrows, and guided and encouraged each other in their ministries, well into their retirement.

Allan was very close with his family, especially his mother. While at university, he would often go home for the weekend and share all his new ideas with her while they washed the dinner dishes together. He gained a sense of adventure from his dad and together they could problem-solve their way out of any situation. He brought these qualities to his parenting and he and Irene navigated life, church, and family camping trips together with their three children, Theresa, Donna, and Jon. Allan taught his children that life could be lived calmly and with integrity. And then came the grandchildren. He loved his grandchildren! He was surrounded by their pictures, prayed for them everyday, and loved it when they came to visit.

Allan was passionate about family history. He picked up this interest from his mother and continued her work. He was always fascinated by family stories and sought them out by talking with grandparents, aunts, uncles and cousins. He has blessed us all by writing them down and publishing them in a number of family history books.

Allan’s was a life well lived. How can one describe his character? One of Allan’s favorite books contains a wonderful description of him: “For the fruit of the Spirit is love, joy, peace, patience, kindness, generosity, faithfulness, gentleness and self-control.” The author must have known Allan when this was written.

We are grateful to the staff on A4 at St. Boniface and Jill at the Seven Oaks Day Hospital for their compassionate care.

The funeral service will be held at McIvor Avenue Mennonite Brethren Church on Tuesday, May 24th at 11:00 am followed by a reception. Viewing will be held prior to the service. The service will be streamed at https://www.youtube.com/watch?v=Bv5XMfk0JQg&list=PL0uX9o7l5pTgb0ms-piKL25utfMFCoRS4

The family strongly recommends that masks are worn during the service.