To share your memory on the wall of Antony Wiebe, sign in using one of the following options:

Antony (Tony) Wiebe passed away suddenly at his home of cardiac arrest, at age 83. He will be greatly missed by his beloved wife Olive of 59 years, daughters Carolyn (Brent) and Myra (Dean), and grandchildren Alex, Aaron, and Emelia. He is survived by one brother Ed, several sister in-laws, brother in-laws, and numerous nieces and nephews. He was predeceased by his parents Abram and Katharina (nee Toews) and siblings Jake, Neil, John, Helen, Mary, and Anne as well as six infant brothers who died shortly after birth.

Tony grew up on the family farm southeast of Plum Coulee, Manitoba. He was the 7th of 8 children. He had a happy childhood of bike riding, climbing trees, and playing games indoors and out. There was significant family change when his father became totally blind when Tony was 5 years old until he was 10, when his father’s vision was miraculously restored in one eye after a heavy jolt to the head. During the time of his father’s total blindness, his mother and older siblings ran the farm while his father entertained Tony and the other young children by telling Bible stories. He attended the local country school up to grade 10, grade 11 at Altona Collegiate, and grade 12 at the Mennonite Collegiate Institute in Gretna.

Tony attended the Provincial Normal School for teacher’s training and taught in the country school of Kleinstadt for 3 years. He then attended the University of Manitoba and graduated with a B.A. in 1961, majoring in English and history. Some interesting summer jobs he had were boatman and maintenance man for an elderly lady with an island house on Lake of the Woods, a porter on CN trains where he travelled from eastern to western Canada, and house roof construction.

In 1959 he met Olive Pries, the love of his life, when they were both teaching in southern Manitoba. They continued to see each other for almost 3 years and were married August 4, 1961 in Winkler, Manitoba with her father officiating. They lived in Winnipeg for their entire marriage, with the last 54 years in their house in the Fort Richmond suburb.

After teaching for some years, Tony entered the social work field with the provincial government. He went back to the University of Manitoba and received his B.S.W and M.S.W. He then worked for the Provincial Government Social Services for 4 years. In 1969, he started working at the Family Bureau (later called Family Services and then Family Centre) as a marriage and family counsellor, and later as a supervisor, student placement coordinator, and acting Executive Director for 1 year. After 30 years with the agency, he retired in 1999. After retirement, he took many courses with Creative Retirement and served 3 years on the United Way Pensions and Benefits Board.

Tony & Olive raised 2 daughters, Carolyn and Myra, who were very much the centre of their lives. He was an excellent father, always having time for the children to play a board game or a fun activity outdoors. He could engage in multiple activities at one time while adeptly attending to the physical, cognitive, and emotional level of each person. Later as a grandfather, he continued his attentive love, warm hugs, and devotion towards his grandchildren. Fun times with Grandpa included playing with Lego, ping pong competitions, puzzles, looking for frogs, tobogganing in winter, and walks in the park. Riding on Tony’s shoulders was always a highlight for the young children.

Tony was a man of various interests and abilities. In his younger years, he played baseball for the Plum Coulee Braves, sang with the Winnipeg Philharmonic Choir, and later participated in recreational curling. He was an avid reader, keen “birder”, a good woodworker who built toys and furniture, and a handy repairman who fixed many things around the house and yard, including finishing the basement with only hand tools. He still climbed trees in his 70s to trim branches. He had a large collection of classical music that he regularly enjoyed. He was well-versed on world history, and appreciated a good discussion about world events. He liked biking, cross-country skiing, walks in the woods, and yard work.

Tony was a kind, considerate person and a man of his word. He was always patient, empathetic, and helpful, with a sense of humour. He will be lovingly remembered by his family.

A private burial with family is planned at this time. A memorial service might be held at a later date.
Read Less

Print
A private service to be held, but recorded. More information to follow.

We encourage you to share your most beloved memories of Antony here, so that the family and other loved ones can always see it. You can upload cherished photographs, or share your favorite stories, and can even comment on those shared by others.

Madeline and I were deeply saddened when we heard the news of Tony's sudden passing. Tony and I met several times this past April when we were both confined to Deer Lodge Rehabilitation Centre. Tony was recovering from a stroke and I from a hip replacement. We were able to meet in the lounge where we enjoyed our private visits. In June, Madeline and I visited with Tony and Olive in their backyard gazebo surrounded by birds who were competing for food in the numerous birdhouses hanging all around us. In the midst of all this delightful clamor I jokingly referred to Tony as the Birdman of Fordham Bay. Tony even invited us to their basement where he had a display of photos and write-ups of all the birds that visit their backyard sanctuary every year. Unfortunately we couldn't accept the invitation on that occasion but I will always remember this last visit. Now I appreciate Olive's choice of a well treed resting place for Tony. Our sincere condolences to Olive and family.
Peter & Madeline Pauls

So sorry to hear about Uncle Tony. I can still remember seeing you all at the many family gatherings we had over the years. There was always a warmth and quiet consideration given to every conversation Uncle Tony had with people. His interest in each person was always genuine. I can imagine him as a father and a husband being wonderful and thoughtful, taking time and energy with each of you, and later with the grandchildren. I'm sure he'll be sorely missed and we send our condolences and thoughts to you all during this time.
Love,
Viola and Dave xo
Comment Share
Share via:
BS

Posted Nov 13, 2020 at 10:28pm
We have good memories of times together with Tony and you Olive. We went for walks in our woods, watched our children play, had stimulating conversations and enjoyed being together. Bert recalls Tony's interest in birds when we went for walks. It is with a sense of regret that we missed opportunities to connect during the last years. Thank you for phoning, Olive.
Our condolenses,
Bert and Lenora 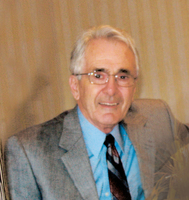