To share your memory on the wall of Elsa Neufeld, sign in using one of the following options:

Elsa was feisty. She was willing to push the edges of her world and still enjoy that world.

Elsa was feisty. She was willing to push the edges of her world and still enjoy that world.

Elsa Klassen was the middle child of 15 children. Born on 13 March, 1932, to Mennonite farmer/pastor David (DD) Klassen and Susan (Heinrichs) of Halbstadt, Manitoba (near Altona). She moved with her family to a farm near Homewood (east of Carman) where she attended a one room school. She was called Elsie by her family and friends – until she reclaimed Elsa in the 70s.

Elsa enjoyed life on the childhood farm. Mother Susan often traveled with DD to sometimes distant church events, so the home front was left to the older children. Elsa had fond memories of being taken care of by her older siblings - with farmyard games galore - and more complicated memories of taking care of her younger siblings – including five rambunctious boys! Through it all she learned to work hard. She had all the rural homemaking skills. Well, most of them.

Elsa enjoyed stylish clothing. Her father was more inclined toward the practical. As a teenager, Elsa scraped together pennies and bought red high heels. DD was very disappointed in his daughter's prideful ways and threw the heels high into a farmyard tree. DD had a good sense of humour, so we're not sure how awkward this was. Elsa's desire to be always “put together” stayed strong.

Her responses to authority were honed as she attended Mennonite high school in Gretna. Elsa and her friends were caught wearing fashionable street clothing, and the principal was not pleased. Elsa, being an observant person, said to the feared principal, “I notice that your wife enjoys dressing up in fine clothing. Can you please ask her what she thinks of the drab smocks we girls are forced to wear while the boys get to wear nice shirts and ties?” The tactic worked perfectly!

While at private school, Elsa met Werner Neufeld. They were both children of church leaders, she the adventurous one and he the careful one. After grade 11, she tried teaching in a one room school near Winnipegosis. That was hard on her, so she moved to Winnipeg to take clerical work. Werner did his best to keep up, and perseverance prevailed. They were married 31 May, 1953.

Elsa and Werner bought their own farm; far enough from Mennonite central in Whitewater and close enough to the more interesting (for Elsa) town of Boissevain. She wasn't the most eager to be on a tractor, but learned how to back the truck up to the auger with the best. She strained a bit under the homemaking expectations of the elder Mennonite women. A dear neighbour to the west was fond of telling a story of how Elsa got busted. Elsa had trouble, one of those early days, getting bread to rise. Not wanting to have Werner witness her failure, she took the reluctant dough out back and stuffed it into a gopher hole. Of course Werner was walking home from the field and came upon a spectacle. It seems a gopher hole in the sunshine is just the right environment to get dough to rise!

The 70s was the era of Women's Lib. Elsa was on board with bells on. She thrived when she found a listening ear, or, even a combative one. She was ready for the fight, and the joy, of her life. She even converted her reluctant husband. Werner was at first embarrassed by his wife's infatuation. He'd stuff Ms magazine under his arm as he left the post office. But it wasn't long before he was sitting down to read it cover to cover, even before Elsa had a chance. Such was her charm.

This was also the time of the Turtle Derby. Along with turtle races there was a beauty contest. For Elsa, this was too much. She wrote a letter to the editor comparing the Derby's beauty contest with the Fair in which shapely cattle were paraded and sold. She could see some value in the event, she concluded, if boys were equally paraded. She challenged town leaders to drop this outdated event. It was.

Like her principled father Elsa had a great sense of humour. We have enduring memories of her throwing back her head in spontaneous laughter. One time was when the Derby leaders challenged Elsa to prove her worth as a feminist. They invited her to take on a “male chauvinist” (as the Recorder put it) in a go-cart race down Main Street, with hundreds of people watching. Sure, she said, why not. She lost miserably, but laughed all the way to her own moral finish line.

Elsa and Werner loved to travel, throughout North America, Europe, Australia and South Africa. Werner was the driver. Elsa the consummate short order cook. She could pull a full coarse meal out of her basket at 60 miles an hour on a hairpin mountain road and keep her finger in the page of a book while she did it! She loved to be out and about in the world.

Elsa had to keep busy. Besides farm and church duties, she worked at a fledgling workshop for handicapped adults that eventually became Prairie Partners. She and Werner started a driving school so Elsa could teach older women to drive. She then taught high schoolers and refugee families to drive. During the Cold War nuclear scare she helped run an annual International Peace Festival at the Peace Garden that pulled in big name speakers and hundreds of activists. She later became a health care aid, and, she sold encyclopedias on the side! More than anything, she enjoyed meeting new people.

Elsa loved to host, and reveled in conversations she'd have with random souls. She fixed up the second floor of their pioneer brick home and turned it into a Bed and Breakfast. When they retired to Winnipeg in 1990 she kept that business going. The grandchildren agree, that the best times were playing in the backyard pool and hot tub at Grandpa and Grandma's. Grandpa took care of the pool and Grandma made sure everyone had towels, snacks and Saskatoon perogies. She got into quilting up a storm so that each grandchild had both a baby blanket and bed blanket. Then, in response to a creative writing course she was taking, she decided to write a Grandparent book for each grandchild.

Elsa's feisty flame began to falter about 10 years ago. Werner did his best to cover for her lapses of memory. But dementia is a determined stalker. On a visit not long ago, long after she was able to identify any of us by name, she was asked what she still wanted to do. “Oh, I've done all I was meant to do here,” she replied with a twinkle. “Have you?” A motivator to the end.

Mom loved to sing. It was at times embarrassing for her children as her voice lifted over the congregation toward heaven. But even a few days before her death, she led her children in a few hymns over a video visit. The songs, it seems, never leave us. In dedication to Elsa, we ask you to sing more, challenge the status quo more, laugh more, and meet new people more. Thereby, she'll live on.

The family appreciates the excellent care Elsa was given at Convalescent Home of Winnipeg through the last few years since Werner's passing. She fell asleep one night and slept deeply till she passed a day and a half later. 12/12/2020. Thank you!
Read Less

We encourage you to share your most beloved memories of Elsa here, so that the family and other loved ones can always see it. You can upload cherished photographs, or share your favorite stories, and can even comment on those shared by others.

Posted Dec 14, 2020 at 07:31pm
I'm sad too hear of Elsa's passing. She was a great friend from MCI days in the 1950's. It was good to have kept in touch over the years. She will be missed. Special condolences to David and Maggie and their family. Thoughts and prayers, from Gredi. 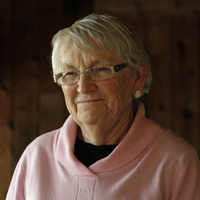