To share your memory on the wall of Garry Hiebert, sign in using one of the following options:

After a lengthy and courageous battle with cancer, surrounded by family, Garry peacefully passed into Gods hands.


Garry was predeceased by his parents Edward and Betty Hiebert.
He leaves to cherish... Read More
GARRY HIEBERT

After a lengthy and courageous battle with cancer, surrounded by family, Garry peacefully passed into Gods hands.


Garry grew up in North Kildonan and graduated from River East Collegiate. It was here that life long and enduring friendships such as those with Ed Martens and Herb Regehr were developed, a theme that continued throughout his life.
Always inquisitive, Garry set out to experience life. Taking him backpacking twice through Europe, working on an Israeli Kibbutz and traveling 17 times to Barbados, that again developed life-long friendships.

Garry’s professional career involved working for Nelson River Construction and the last 20 years with New Flyer Industries till his retirement in 2019.

In 1985, Garry’s continuous love of adventure brought him to Ward Island in Lake of the Woods where he soon became the proud owner of a cottage. This was his happy place, a place where he was always willing to share with family and friends. Garry enjoyed fishing and having a drink with his friends.

In typical Garry fashion, meaningful friendships were continually being developed and brimmed with a reservoir of beautiful fond memories. These we know provided comfort during his journey and battle with cancer.

In 1991 Garry met the love of his life Donna Dahle and created a loving home and life together. Undoubtedly the proudest moment in Garry’s life was the birth of their son Carl. Rarely did a conversation not include Carl, his accomplishments and the man that he has become. Carl’s wife Laura and her family (Beens) became a significant part of Garry’s life in the last 3 Years. They supported Garry and made him feel part of their family.

GARRY’S WORDS :
“I do want people to know I consider myself to be very fortunate and do not feel cheated. I have had and been able to live such an amazing life. To have been blessed with the most loving caring wife and son, daughter-in law, parents, brother, sister-in-law, cousins and friends who provided me with unconditional love and support. So many “ families “ have been a part of my life and helped me experience what life has to offer”.

The family would like to thank North Kildonan Mennonite Church for their support, Dr.Tunavic, Dr. Gordon and the amazing staff at HS Cancer Care.

In lieu of flowers if friends so desire, please make a donation to Cancer Care Manitoba.
A celebration of Garry’s life will take place once COVID restrictions are eased.
Read Less

We encourage you to share your most beloved memories of Garry here, so that the family and other loved ones can always see it. You can upload cherished photographs, or share your favorite stories, and can even comment on those shared by others.

Posted Apr 27, 2021 at 09:49am
Hi Randy
Sorry to hear about Garry. Sorry for the grief, pain and missing him in your life. I didn't see him often enough but when I did he was always excited to see me. Always cheerful, friendly and positive. A good person! He will be missed by many. Randy may God grant you, Lynn and family peace and comfort. Frank Klassen
Comment Share
Share via: 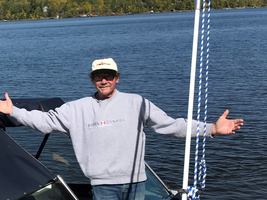