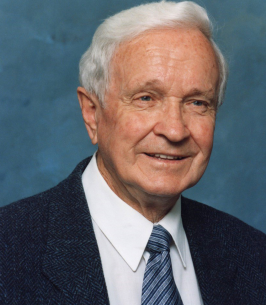 George Hildebrand, 97, died on Sunday, September 11, at Donwood Manor in Winnipeg, Manitoba, with his sister Bettie at his side.

Born on April 21, 1925, in Ekaterinoslav, Ukraine, George arrived in Halifax, Nova Scotia, on January 1, 1927, with his parents, Daniel and Anna (Dyck), and four siblings. As his parents struggled to establish themselves in farming, George enjoyed a carefree childhood on the prairies near Niverville. The family swelled to 12 children, with his last sibling arriving in 1940.

At 22, George embraced the Christian faith, remaining committed to it for the rest of his long life. In 1950, he married Anne Schellenberg, the raven-haired daughter of neighbouring farmers. Anne, who died in 2016, was the love of his life, and together they raised 5 children.

George was a farmer at heart to the very end. For about 15 years, he and Anne farmed near Tourond, while George usually worked off the farm in Winnipeg to supplement their income. In 1967, the family moved to Niverville and their fortunes changed as George and Anne, together with their partners, successfully grew two agricultural businesses, Niverville Farms and Puratone. George worked in the business until age 55, bringing to the business world not only his sharp mind but also his gentle spirit and love for people.

After retirement, with their children fledged, George and Anne moved to Birds Hill and then Winnipeg, where he worked for a time in home care and volunteered at Union Gospel Mission. “Where there are people, there is the opportunity for kindness” was the mantra he lived by. His kindness and compassion extended to all, but especially to those who were in any way marginalized or disadvantaged.

During the last four decades of his life, George indulged his love of learning. Although he had to leave school after Grade 8, his curiosity was never satiated, and through his voracious reading and love of language, his knowledge and vocabulary grew to the end of his life. His love for Nature also kept increasing. As a young farmer, he carefully worked the land around the homes of ground-nesting birds in the spring, and as an octogenarian, he delighted in the birds and squirrels outside his window.

After retirement, George travelled widely with Anne, from New Zealand and the Philippines to Guatemala, Israel, and more. Their adventuresome spirits led them to taking up downhill skiing, tennis, and cross-country skiing in their 60s. Of course, George’s life was not without its trials. He struggled with depression for a number of years in mid-life, but he lived the last 30 years free of that darkness, a freedom which, like many things in his life, he attributed to God’s grace. His acceptance of what life brought and his uncomplaining nature were apparent to all.

George was predeceased by his wife, Anne, his son Gary, and 6 siblings. He was greatly loved and admired, and his memory will be cherished by all who knew him, especially his sons, Don (Judy), Dale (Marlene), and Ray (Danielle); daughter Joyce; daughter-in-law Bernice; 13 grandchildren; and 3 great-grandchildren.

The family would like to extend their heartfelt thanks to the staff at Donwood Manor, who cared for George at the end of his life with utmost kindness and gentleness. We are forever grateful.

The service will be livestreamed at https://fweb.tv/85773