To share your memory on the wall of Jordan Garber, sign in using one of the following options:

It is with heavy hearts that we announce the unexpected passing of our dear son Jordan (Jay), on December 29, 2020 at the age of 25 years.

It is with heavy hearts that we announce the unexpected passing of our dear son Jordan (Jay), on December 29, 2020 at the age of 25 years.

Jordan was born in Winnipeg on September 18, 1995. He grew up in West Kildonan, attending Luxton School, Andrew Mynarski School, and Tec Voc High School. At Tec Voc, Jordan discovered his love of broadcasting and production. He made many good friends at Tec Voc that he cherished to this day. Jordan was a natural performer; he loved an audience and the opportunity to entertain. This is apparent in his many podcasts that he worked diligently on, and he had a large national following in the wrestling community. He interviewed many big names in wrestling and was always excited to share the next upcoming star.

He had a profound love of all sports, but he was passionate about baseball and hockey. He was a huge fan of the Winnipeg Goldeyes and the Winnipeg Jets. He met many players in his time and loved to collect autographs. Jordan had an uncanny mind for sports statistics; he could tell you anything about any player on any team. He grew up watching many games with Mom and Dad, and Sundays were spent with Gramps watching football and NASCAR. Jay travelled to Chicago with his parents to see the Cubs play in Wrigley Field. He got to see his Toronto Blue Jays play in Rogers Centre, and even had tickets right behind home plate. He saw the Minnesota Twins often on our many trips to Minneapolis when he was growing up – in addition to seeing the NBA Minnesota Timberwolves play against the New York Knicks.

Jordan loved animals. If friends and family wish to honour Jay’s memory, donations may be made to the Winnipeg Humane Society.

Jay was a kind and gentle soul with a quiet sense of humour. He will be missed beyond measure.
Love you, Pal.
Read Less

We encourage you to share your most beloved memories of Jordan here, so that the family and other loved ones can always see it. You can upload cherished photographs, or share your favorite stories, and can even comment on those shared by others.

Posted Jan 10, 2021 at 11:34am
I was extremely saddened to hear of Jordan's passing. We had fallen out of touch in recent years, but I remember him approaching me after SPW shows when he was very young and asking about wrestling. He wanted to train, but I told him he should work on his mind, watch lots of tapes, workout, and in a few years he could be trained and probably be far better than anyone else. He was a good kid. I wish we could all rally around him, let him know how valued he was, because he was one of us. I send his family and friends my deepest, heartfelt condolences. Jordan, you were one of the good ones.
Comment Share
Share via:
M

Posted Jan 10, 2021 at 10:28am
My condolences to all that loved Jordan. His passing leaves a unique void in the local wrestling fraternity. Jordan’s passion and tenacious approach and love of the scene will be sorely missed. I think everyone who ever dealt with Jordan found a way to appreciate his sense of humour and enthusiasm.
I was lucky to call him a friend and will miss him.
Comment Share
Share via:
JR

Posted Jan 09, 2021 at 08:00pm
My condolences to the Garber family. I’ve worked with Jordan at KPI connect. He is one of the most outgoing and funniest person I have ever met. It’s sad that your gone in such a young age.! Rest easy my dear friend.
Comment Share
Share via:
A

Posted Jan 08, 2021 at 10:24pm
I worked with Jordan at Ipsos. I enjoyed discussing hockey, politics and old school wwf wrestling with him. He had a great sense of humour and would always make the work shift easier.
Comment Share
Share via:
H

Posted Jan 08, 2021 at 10:20pm
I will miss Jordan! I’m one of the older ladies at Ipsos but that didn’t stop Jorden from sitting near me especially on the Sunday shift! We talked about life and he told me about his parents and how good cook his grandma was! He was always upbeat and hearing him being so enthusiastic about Ipsos helped me to appreciate working there too!
You won’t be forgotten Jorden!
Comment Share
Share via: 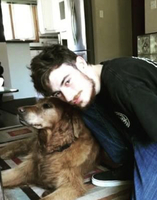