To share your memory on the wall of Marrian Zacharias, sign in using one of the following options:

Marrian Zacharias was born in the small community of Mistatim in northern Saskatchewan, the first of eight children born to Susan and Jake Wieler. By the time she was of school ag... Read More
MARRIAN ZACHARIAS
(Sept. 27, 1944 - April 19, 2021)

Marrian Zacharias was born in the small community of Mistatim in northern Saskatchewan, the first of eight children born to Susan and Jake Wieler. By the time she was of school age her family had relocated to Steinbach, Manitoba, the first of subsequent moves to Winnipeg and Sydney. A positive and formative experience at age seventeen was her attendance at Elim Bible School on the invitation of a friend. This clarified and grounded her in her Christian faith, which she faithfully embodied throughout her life.

A period of employment as a live-in aide to a polio victim in Winnipeg followed. A great deal was demanded of her in this role, but she prevailed and derived benefit from the experience. Sustaining her in this was her active involvement in the church she had sought out (now Nassau Street Church), where she was baptized and met Leslie, who was to be "the love of her life." The two were married in 1968, and soon moved to Winkler, where Leslie assumed a position at Garden Valley Collegiate and Marrian worked in early childhood education. They joined Pembina Mennonite Fellowship, where they were blessed with many lifelong friends. In 2010, Leslie and Marrian moved to Winnipeg, where they became active members of Charleswood Mennonite Church.

Some significant challenges were part of Marrian's life. Her father passed away when she was nineteen, leaving her mother to provide for Marrian's seven younger siblings under trying circumstances. At the age of forty-nine, Marrian broke her hip and had to deal with rehabilitation and further surgeries over a period of years. She overcame these and the other hardships she encountered.

Marrian's family was central to her life, including three children whom she delighted in and to whom she was devoted: daughter Lauren was born in 1971, followed by Paul in 1975 and Robert in 1977. This has come to include marriage partners and six grandchildren - each beloved and a source of pride and joy. A recent and particular source of satisfaction and enjoyment for Marrian was witnessing the interest in sewing and quilting to which she had introduced each grandchild.

Marrian had exhibited interest in visual art early in life and later pursued sketching and painting. She also became a skilled potter. She established a basement studio where she produced pottery for sale and provided instruction in wheel thrown pottery. She also became a devoted quilter and participated in the formation of an active group of quilters named “Barnswallow Quilters.” After their children had left home and the use of personal computers was popularized, Marrian determined to become computer savvy and became the household IT support by dint of her determination and persistence.

Marrian declared that she loved her life. She was secure in the love of her family and her faith. We are grateful to God for who she was, what she meant to us, and the life she lived.

We are grateful for the care and support provided by the palliative care team as well as home care staff.

Viewing will be available by appointment at Charleswood Mennonite Church on Saturday, April 24, 2021.
Please call Friends Funeral Service 204-339-5555 to schedule a viewing time.

The service will be livestreamed.
To watch the livestreamed service, please go to:
https://youtu.be/OsEdQDyfNl0
Read Less

We encourage you to share your most beloved memories of Marrian here, so that the family and other loved ones can always see it. You can upload cherished photographs, or share your favorite stories, and can even comment on those shared by others.

Posted Apr 27, 2021 at 09:52am
We will always remember Marrian for her desire to bless her family and friends in everything she did. She used her talents and gifts wisely. She placed God first in her life. She loved her family and supported them in everything they did.
I was so blessed to be able to call her my sister.
Comment Share
Share via:
ED

Posted Apr 26, 2021 at 01:55pm
Les, that was a lovely service and tribute to Marriann. My condolences to you and your family.
Comment Share
Share via:
EL

Posted Apr 25, 2021 at 11:12pm
What a lovely tribute to your Mom, Lauren. Thinking of you all during this time and praying for comfort and peace. Love, The Fischer Family

Myra and I learned just this morning during worship at Covenant Mennonite of Marrian's passing. We share our condolences and will be thinking of you as you grieve your loss and remember the beauty and rich spirit that Marrian brought to our world.
With sympathy and prayers. Larry & Myra Danielson
Comment Share
Share via: 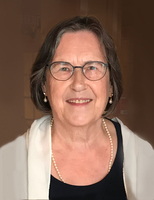