To share your memory on the wall of Mary Pauls, sign in using one of the following options:

Print
Mary Louise (Enns) Pauls was born at Concordia Hospital in Winnipeg on November 2, 1933, the second of nine children of Nicolai and Justina (Rempel) Enns.

Mary was raised on the farm in Domain, within a larger Mennonite community. H... Read More
Mary Louise (Enns) Pauls was born at Concordia Hospital in Winnipeg on November 2, 1933, the second of nine children of Nicolai and Justina (Rempel) Enns.

Mary was raised on the farm in Domain, within a larger Mennonite community. Here she developed a pragmatic work ethic, a high value on family and a deep and rich faith, all of which shaped and guided her for her whole life.

As a child, she made the decision to trust Jesus for her salvation, and began a relationship with Him that continued and deepened throughout her life. The verse that was meaningful to her when she committed her life to Christ was Matthew 11:28; “Come unto me, all who are weary and heavy laden, and I will give you rest.” She was later baptized in the La Salle River near her church.

Mary attended the one room schoolhouse in Domain. She recounted stories of long walks and sleigh rides to the school, one and a half miles from home. It was always a good day when the railroad workers would stop and give her and her siblings a ride to school on the jigger. Mary completed grade 11, and did not pursue further education or job training as she was needed to help her mother at home. Mary later spent a year at Winkler Bible Institute.

By this time, Mary had developed an interest in the ‘boy next door’. Having met through church and community events, Rudy and Mary began a serious courtship that resulted in marriage on June 26, 1954. Rudy began his teaching career in Winnipeg, while Mary established their home. Their union produced four children, Valorie Carol born on June 12, 1955, David Rudy born on February 28, 1958, Waldemar Jacob born on September 30, 1960 and Frederic John on April 22, 1964.

Mary brought her love for God, work ethic and skills honed during her upbringing to create a loving and caring home environment for her family. She was constantly trying new recipes, and her skills with needle and thread were further enhanced by sewing classes she took in Winnipeg. Her family was always well fed and clothed.

Responding to an opportunity to help with a new church plant, the family moved to Thompson, Manitoba in 1961. Besides teaching, Rudy helped build the church building and conducted the choir while Mary taught Sunday school and DVBS. Memorable events for the family included witnessing the placing of the steeple on the finished church building, forest fires that threatened the town, mosquito foggings that interrupted outdoor meals and train rides back to Winnipeg.

Leaving Thompson in the summer of 1964, the family moved to Brandon where Dad taught for one year. They then moved back to Winnipeg in 1965. With Rudy having summers free, great family memories were created with trips in the ’64 Chevy Impala pulling the Silverliner pop up trailer to the east and west Canadian coasts and the U.S. Badlands and Yellowstone National Park.

Wanting a more ‘country’ upbringing for their boys, the family moved to ‘the acreage’ near Oakbank in the summer of 1972. Mary did her best to set up a temporary home in an old mobile home for several months while the new house was being built. The rural environment and many things to explore were a welcome adventure for the boys. Here Rudy began raising bees and producing honey as well as growing acres of vegetables and raspberries. Mary complained only a little about how much work the acreage required and continued to enjoy hosting friends and large family gatherings in the backyard and screened-in porch.

With her children growing and moving away, Mary was ready for new challenges. She took her cooking skills to MBCI where she worked in the cafeteria with her sister Helene. The duo catered many events at Palliser Furniture as well. Mary then began a 10 year stint in the drapery department of Sears, a job she enjoyed very much.

Rudy’s retirement in 1988 gave the couple time to serve at MCC in Akron, Ohio, the Gleaners in B.C. and Haggai Ministries in Hawaii. Mary also volunteered at the Ten Thousand Villages store in Winnipeg. Mary spoke of how she was blessed by these opportunities and the ways she saw God at work around the world.

Rudy and Mary moved into Concordia Village in 2014, enjoying the company of old friends they met and new friends they made there. Mary was active in the library as well as taking meals to those who were unable to make it to the dining room.

Family always remained of the utmost importance to Mary. She looked forward to hosting her children and grandchildren every time they came from a distance, and she nurtured close relationships with her grandchildren that they cherish to this day. On her wall in her home are many pictures of family, accompanied by the following saying:

Mary was blessed with a love of beauty and a creative spirit. The expression of this showed up at a young age with pencil crayon drawings and she eventually took art classes for her own enjoyment and learning later in life. Her paintings have beautified their own home and graced the walls of many friends and family members. Her children and grandchildren cherish the many homemade birthday cards they received with personalized art work and sentiments.

Mary lived a healthy, vibrant life. In May of 2020, she began to feel poorly and began seeking medical attention. Her health continued to deteriorate until she entered the St. Boniface hospital on October 11, one day before Rudy’s 90th birthday. The following week Mary received her diagnosis of stage 4 Lymphoma. Given her options for treatment, Mary, with Rudy, decided that palliative care would be the route she would go. Being a very pragmatic and understated person, she said it only made sense and that, even though things would get worse for a while, after, they would get a lot better. She told her close friend Bettie that “the best is yet to come”.

Due to a Covid outbreak at the hospital, she was not able to receive visitors in her last few days. The family was grateful that she had kept up her tech skills and was able to video chat from her room during her time of isolation.

Mary passed away on October 26, 2020, alone, but not alone. Although the family would have wanted to be there, they are so thankful that she had a relationship with a God who never leaves or abandons us and was present with her all the time.

Mary’s relationship with God remained strong throughout her life. Songs of God’s faithfulness and steadfast love often filled her home. Her favorite verse became Psalms 46:10; “Be still and know that I am God”. Her go-to verse while Rudy had an extended hospital stay was Nehemiah 8:10; “The joy of the Lord is my strength.” She trusted in God through it all. Her prayer was that that same faith would be alive in her family for generations to come.

Her children rise up and call her blessed; her husband praises her as well. Proverbs 31:28.
Read Less

We encourage you to share your most beloved memories of Mary here, so that the family and other loved ones can always see it. You can upload cherished photographs, or share your favorite stories, and can even comment on those shared by others.

Posted Nov 05, 2020 at 10:22am
We are so very sorry to hear this news. We became very close friends while volunteering at Haggai in Maui. We will always have wonderful memories of Mary and we want to express our deepest condolences to Rudy. Ernie and Annabelle Krahn
Comment Share
Share via:
MT

Posted Nov 04, 2020 at 10:43pm
Oh sweet Mary you sure will be missed by all of us at Concordia Village, both residents and staff! As a Recreation worker you were a model resident- attending my exercises, Ilona’s crafts, helping in the library and meal deliveries, but most of all you were such a sincere and loving friend to ALL, particularly me. I felt such a strong connection and closeness with you, you will always be in my heart and thoughts Mary. Your Facebook messages to me I will cherish forever! I know you are in a wonderful place now, free of pain and I am so happy for you, but sad for the rest of us, missing your lovely presence.
Rudy and family, I am so very sorry for your incredible loss. My thoughts and prayers are with all of you at this very sad time.
Comment Share
Share via:
RG

Posted Nov 01, 2020 at 10:30am
Mrs. Pauls was one of the sweetest women we have ever encountered. Mrs. Pauls told me her name was Mary but, I just not do it. Karen and I were in a Care Group with the Pauls' and others that are now in Heaven and there was such wonderful fellowship and study of the scriptures. Our deepest condolences and sympathy to Mr. Pauls and Family. Karen and Robin Gilmour
Comment Share
Share via:
HO

Posted Oct 31, 2020 at 02:33pm
Mary was an integral part of our “Life Group”, at Concordia Village. She and Rudy were the welcoming hosts for those us coming in from the Community- always having the room ready with seating arrangements as required for our group. Once we’re able to meet again wevwill miss Mary’s presence, participation and friendliness!
We pray for you and your family Rudy in your sorrow during this difficult time. With love in our hearts, on behalf of our Life Group, - Hermine & Dave Olfert,
Judy & Dennis Giesbrecht
Comment Share
Share via:
WD 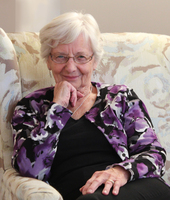