To share your memory on the wall of Louise Akiki, sign in using one of the following options:

With sadness, we announce the passing of our mother and aunt, Louise Marie Akiki, on February 10, 2021 in Winnipeg.

With sadness, we announce the passing of our mother and aunt, Louise Marie Akiki, on February 10, 2021 in Winnipeg.

Louise was born August 24,1954 to Semu Amooti (father) and Bamanyisa Ferlesi (mother) in the beautiful Ituri province in the Democratic Republic of Congo. She completed high school and three years of post secondary studies. She was fluent in French, Swahili and other African dialects. She married Bahigani Bigasaki in 1972. They had one daughter, Francine Mwayuma Birungi. Louise was the administrator of an orphanage and a small hospital while her husband managed a logging and lumber operation. Both employed many people.

War between enemy groups left many orphans in her community. Louise loved the children in her orphanage as if they were her own. She and her husband adopted many of them. She also helped many widows in her community by employing them and having homes built for them. In 2003, an enemy tribe attacked her home, leaving her for dead and killing 14 others, including her husband, parents and parents-in-law. The orphanage was also attacked. The youngest children and their caregivers per-ished. The older children ran to safety in the forest or the church. Pygmies found that Louise was still alive and took her into the forest, along with 24 of the orphans, where they cared for all of them until Louise was able to travel. She realized that there was no future for them in Congo, so she took the children with her to Uganda where they lived as refugees. Meanwhile, her daughter Francine, who was studying in Kisangani (DRC) and later in South Africa, did not know that her mother had survived the attack.

In 2011 Louise and 8 of the children immigrated to Canada, promising not to forget the others and to bring them to Canada too. In 2014 one of the boys was killed in Uganda. In 2016 another 9 of her orphans were reunited with her in Winnipeg. In late 2017, her birth daughter learned that her mother was alive and living in Canada. They re-connected with frequent video chats. Then, on January 12, 2021, the last 6 of her or-phans were reunited with Louise and the others in Winnipeg.

Louise enjoyed living in the St. Boniface area where she could meet with others who spoke French. She participated in a group for newcomers at Accueil Francophone where people recognized her natural ability to lead. They elected her president of the group.

Louise lived with constant pain due to back and head injuries sustained in the attack in Congo, in spite of four surgeries to attempt to repair the damage. In the last 2 years, cancer took its toll. In spite of pain and reduced mobility, she remained positive and hopeful. Her faith in God was strong. She would spend her time reading the Bible and praying for all her children and for others who needed encouragement.

Louise was a strong, intelligent, wise woman who became the loving parent to each of her adopted children as well as her birth daughter. With sheer determination, courage and prayer she rescued her orphaned children and took them to safety in Canada. We will always remember her with love and respect.

The family wishes to thank the Fort Garry MB congregation for their support and pray-ers for Louise and her family, particularly Shanon Wieler who led the church’s effort to sponsor the last group of our siblings. We thank Dr. Musleh, Dr. M.A. McKay, and Dr. Wong, as well as the Community Palliative Care team who made it possible for Louise to remain at home in the care of her family and friends until she passed away on Feb-ruary 10. Viewing and a streamed service, with Pastor Carl Heppner officiating, will be by invitation.

We would like to thank Elaine Enns for her tireless care and boundless love for Shanga (Aunt) and all of our family at this time. For many years before Shanga be-came ill, Elaine was always there to help; her care continued during Shanga’s illness and even after her passing. We are forever thankful.

Burial will be in Brookside Cemetery according to Covid regulations.

We encourage you to share your most beloved memories of Louise Akiki here, so that the family and other loved ones can always see it. You can upload cherished photographs, or share your favorite stories, and can even comment on those shared by others. 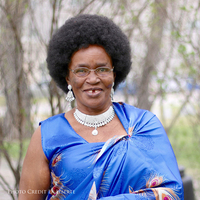