To share your memory on the wall of George Penner, sign in using one of the following options:

With heavy hearts we announce the passing of George Gerhard Penner at his residence on October 2nd, 2020.

George leaves to cherish in his memory his children, grandchildren, and great-grandchildren. They are da... Read More
GEORGE PENNER

With heavy hearts we announce the passing of George Gerhard Penner at his residence on October 2nd, 2020.

George was predeceased by his devoted wife Dorothy (Dirks), his parents Gerhard and Aganetha, his sister Tina, brothers Alfred and Abe and his oldest granddaughter Cristin Braun.

George was born on August 10, 1927 in the village of Orloff, in the Mennonite settlement of Sagradowka Russia. He immigrated to Canada with his family in 1928 to the town of Springstein, Manitoba. Dad graduated from high school in Springstein in 1945 and left the farm for Winnipeg in 1946, where he attended grade 12 at M.B.C.I. God and family have always been the most important aspects of life to our father, and on July 18, 1948 dad was baptized.

Never one to sit idle, dad worked many jobs in those early years, learning many valuable lessons that helped him to make prudent decisions in his later endeavours. Above all else, Dad trusted God and afforded Him all the glory for his successes. In the early years, while working for Allan Killam & McKay, he gained valuable business experience dealing with real estate that would serve him well for the remainder of his life. In 1951, he was offered a position with the Winnipeg Electric Company as a draftsman. He remained with the company until 1956, when he was offered a more lucrative position with C.N.R. He remained with C.N.R. until 1967, when he was again offered a preferred position with Crippin Acres, from where he ultimately retired in 1984, having attained the position of Snr. Draftsman. Dad worked firsthand on such projects as the Kettle and Long Spruce Generating Stations and was an integral part of their success. Dad’s values and faith in his Lord served him well all the days of his life. He was a respected and valued employee whose integrity has been a great source of pride for his family.

George and Dorothy were joined in marriage on June 13, 1953 and were blessed with their three children for whom they provided a wonderful life.

Dad’s love of his family was second only to his love for Christ, to Whom he credited all of his many blessings, and to Whom he was also eternally grateful.

Dad’s accomplishments are numerous. His love for land development began early in life and extended over the entirety of his life. Beginning in 1963, he was responsible for the development of the Spruce Bay Cottage Subdivision. In 1975, he began developing the Silver Harbour Cottage subdivision in Arnes, which he fondly referred to as his second home. In fact, dad referred to the cottage he and mom built in Silver Harbour as his “Haven on Earth”.

In 1979, dad fulfilled another dream of his by starting development of Silver Harbour Marina. In 1980, the marina was opened and over the years had become one of the great loves of his life. Dad was so grateful to be able to work alongside his son and create an inland safe harbour on Lake Winnipeg. He had a lifelong love of sailing and all things nautical. Silver Harbour Marina was a place that dad dearly loved. The wonderful people that he had the privilege and pleasure of knowing over the years were a true source of joy for he and mom. Dad’s favourite place to be was the marina, and many will miss his gentle, kind nature and his ever-present smile and sense of humour. Dad was a kind and humble man, always a source of help, guidance, and quiet reassurance. He was steadfast and true, never wavering in his commitment to Christ and his family and always trying to lighten someone else’s load. He was truly one of the best and will be dearly missed.

Unfortunately, due to our current situation, a private celebration of George’s life will take place on Monday, October 12th in Arnes, Manitoba, with interment to follow.

The family would like to extend our thanks to the many friends and acquaintances who have enriched dad’s life. His was truly a life well-lived! His unwavering faith and commitment to Christ have ensured that he has gone to his eternal reward.

In a recent letter to his brother, dad wrote:

“Instead of adding my name to the reservation list for a week’s vacation on the moon, costing several million dollars, I opted for a free eternal vacation in a million-star resort in heaven with all flights included.”

We love you dad, grandpa and great-grandpa.

If friends so desire, memorial donations may be made to Camp Arnes in memory of George.
Read Less

We encourage you to share your most beloved memories of George here, so that the family and other loved ones can always see it. You can upload cherished photographs, or share your favorite stories, and can even comment on those shared by others.

Posted Oct 10, 2020 at 11:56am
Uncle George was always smiling and quick to laugh. He made me and my family always feel welcome visiting him at Silver Harbor. Very much enjoyed time with him. He will be missed. Condolences to his family
Comment Share
Share via:
A

Posted Oct 08, 2020 at 01:29pm
In our last Christmas Card from George that we received from him ........George wrote (quote) : .....".My flying and vacation days are over ......Instead of adding my name to the reservation list for a one week vacation on the moon costing several million dollars ........I opted for a FREE ETERNAL vacation in a million star resort in heaven .....with all flights included!"

This Christmas Card we will always treasure and cherish!

Posted Oct 06, 2020 at 06:15pm
To Geoff and family. As past members of the sailing club we would always see George walking around with a big smile on his face and saying hello to everyone. He was part of Silver Harbour. He will be missed
Comment Share
Share via:
MG

Posted Oct 06, 2020 at 04:20pm
Our deepest condolences to your families. Saw him at his brother's 90th, and he was looking so good. So sorry to see another cousin leave the fold. We treasured your parents very much!
Comment Share
Share via:
HJ

We cherish the time when George and his friends came by and had a Combine ride with Albert and we enjoyed a great visit; and more recently had a brief visit with George at his brother’s funeral. The links on our chain of cousins is depleting rapidly, and we do miss the loss of another great Penner cousin . A life well lived and we extend our sincere condolences to you the family. 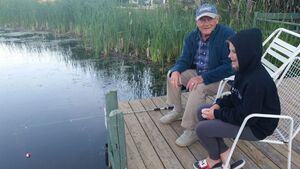