To share your memory on the wall of John Wiebe, sign in using one of the following options:

He was predeceased by his loving wife Helena. He is survived by his two children Alex (and Darlene Wiebe) and Wendy (and Mark Green) and 6 grandchildren, Matthew (Wiebe), Emily (Green), Madelaine (Green), Brianna (Wiebe), Timothy (Green) and Samuel (Green). He is also survived by 6 younger brothers (Cornie, Peter, Abe, Bernie, Menno, Alvin) their families, numerous in-laws and their families.

Dad was involved in many lives through his passion for helping and fixing. Through volunteering with Crestview Fellowship Church,Teulon New Life Church, Union Gospel Mission, St. John Ambulance, and other local community organizations, his generosity and willing servant heart will be remembered.

The family was humbled and blessed by the support from the ALS Society of Manitoba who rallied to provide him with as much care as possible in his last days.

In lieu of flowers, donations may be made to Union Gospel Mission or the ALS Society of Manitoba.

Our Dad, John Wiebe was born April 14, 1941 near Rhineland, MB. He grew
up on a farm near Clearwater, MB. At a young age his strength and concern
for others was tested. Like when horses crushed him between a vehicle they
were hitched to, and the barn - breaking both legs. Or when he rescued his
younger brother Peter from an electrical mishap.

Dad was clever, handy and hardworking. He was installing TV antennas i n the
late 1960’s i n the Clearwater / Crystal City area when he met Helena Barkman,
a single teacher working at Crystal City. They soon fell in love and were
married on July 28th, 1971. They moved to the city where they had 2 children,
Alex and Wendy.

Dad was employed for a time at Pike Sales before moving on to become a
welder at Kilberry which later became MacDon Industries. He remained
employed there until retiring at 65.

Dad was a social person and enjoyed caring for people, and fixing or building
things. He volunteered with the St. John Ambulance brigade for many years. In
the early 1980’s his home church of Crestview Fellowship decided to construct
an expansion. Dad spent many hours and days assisting with the construction
of the building, and then later many years on the maintenance committee.

Mom and Dad had many dreams of how to renovate their home, but eventually
settled on starting from a clean slate. They purchased a property in Gunton,
MB north of Winnipeg and in 2008 built a brand new home. Again, dad was
involved in nearly every aspect of construction from foundation to painting.

They lived in Gunton and attended New Life Church in Teulon for 10 years.
During that time again, Dad was drawn to helping people through maintenance
in the church, involvement in the community hall and local museum, and
delivering Meals on Wheels with Mom.

Dad spent many days commuting into Winnipeg where he picked up part time
work driving vehicles for Avis, and volunteering as part of the building
maintenance team at the Charis Center under Union Gospel Mission
downtown.

As grandchildren came, Dad enjoyed spending time with them, and would
spend time teaching and showing them how to fix, weld and make things. He
would attend school concerts and rock concerts, go fishing, share ice cream
treats and even explored the world of Virtual Reality.

The family went camping at Rushing River, Clear Lake/Riding Mountain, Birds
Hill and other campgrounds. Road trips were enjoyed with trips to Banff, Black
Hills, Thompson and even as far south as Texas. A vacation to Mazetlan was
another highlight. Even after Mom passed away, Dad managed a train ride to
visit his brother Cornie in Edmonton. As his strength waned, we were still able
to take him back to Crystal City and Clearwater to see the first places where
he lived and worked.

Eventually, the years of hard work caught up to Dad, and he needed to slow
down. With the passing of Mom in 2019, and his strength declining, he made
the decision to downsize and move to the city. His house sold just as the
Corona Virus was taking hold in Manitoba. He settled into an apartment i n
Winnipeg near Sturgeon Creek. Restrictions on visiting and socializing began.

With some maintenance on an electric scooter, he was soon out and about
nearly every day testing the range limits of the batteries. He made trips to
Princess Auto, the coffee shops and to church. Not even an accident in the
summer that totalled the scooter could slow him down.

During this time he started to have challenges breathing, often panting and
struggling to catch his breath. His hands were also getting weaker. He longed
for back surgery (because of an old back injury) hoping it would improve his
upper body strength.

As his strength faded, a decision was made to move him into assisted living for
November 1st. He enjoyed a more relaxed lifestyle for about 3 weeks; then
was taken to the hospital after collapsing one evening. After 9 weeks in the
hospital, he was finally released with an ALS diagnosis. Despite the diagnosis,
he did regain some strength in the hospital. He spent the next 3 weeks in his
Westhaven apartment being cared for daily by home care and family until his
sudden release from suffering on the morning of February 18th.

Dad’s faith was stronger than he would admit to, and he was concerned for the
lost around him. He touched numerous lives with his living testimony and even
though he only spent a few weeks in the assisted living apartment, his faith
was noticed there too. He always enjoyed listening to the various bible
programs on 1250 CFAM, and would call us to tell of messages he l earned
from, or of speakers he enjoyed.

Dad’s inability to catch his breath l eft him with a weakened voice. However in
his last days we noted that his praying was still clear and at full volume. Dad
struggled a bit with reading, lamented a lack of focus, and although he wasn’t
able to use his fingers for fine work, he could flip through his Bible, find and
read whatever text he wanted to. Special gifts from God!

There is no denying the trauma of an ALS diagnosis. As a family, we are
grateful to the WRHA, the ALS Society of Manitoba, and the staff at the Deer
Lodge clinic. They recognized the stage Dad was in and rallied a lot of support
for Dad in short order - some of which he was not able to utilize on account of
being mercifully called home.

There were many people who took time to encourage Dad. Special thanks to
his brothers who called him regularly. And a special thank you also to Pastor
Henry who encouraged Dad daily with reading of scripture and singing a song
for him.

Thank you to everyone who took the time to phone Dad or send a text while he
was in the hospital and later at his home. He appreciated the songs sung and
played, the visits, the encouragement and prayers.
Read Less 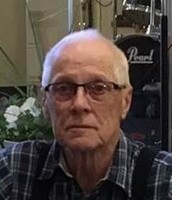 Donations are being accepted for: UNION GOSPEL MISSION,.
Family Login
Subscribe to Updates